skip to main | skip to sidebar

This is my sixth and final post in my series regarding the Corvids: the Jays specifically. I’ve decided not to include the Mexican Jay, as it is not likely I’d ever see it, even in way-south-central Colorado. Funny, when I look at a small map, Mexico just doesn’t look that far away; all my wishing isn’t going to bring them further up New Mexico, either. (They're really cool birds)

As stated, Jays are several colorful species of passerine, or perching bird. They are somewhat large for songbirds (as passerines are less accurately called) with sturdy, thick bills and strong legs; and they’re loud and every bit as impertinent as their name implies (Jay). Like other corvids, the Jays may even learn to mimic human speech. Jays are omnivores and eat about anything, though nuts and seeds are most important to their diet. However, some members of this diverse family, notably Clark’s Nutcrackers and Pinyon Jays, will undertake substantial movements in search of specific tree seeds. Most members do not migrate though, with the exception, primarly, of the Blue Jay. 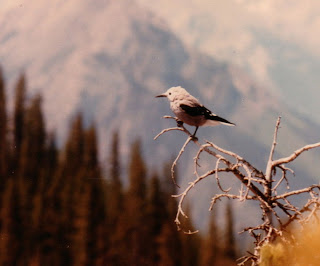 Corvid numbers are healthy, in spite of losses to West Nile virus. Many are expanding their territories and in spite of hundreds of years of persecution as pests, clearly show no ill effect on their population. This species has long been known for cleverness but recent studies have shown they have even more intelligence than formerly known; even having the extremely unusual animal ability of recognizing itself in a mirror. Sexes look alike.

Clark's Nutcracker (Nucifraga columbiana) is ash-gray allover, with black and white wings and tail. Central tail feathers are black, outer tail-feathers white. There is a small, white patch at the trailing edges of the wings most visible in flight, on an otherwise black wing. Bill, legs and feet are black. Its primary food source are the seeds of various pines, especiall white pine, found in high altitude, cold climates. It nests early and moves to lower altitudes following the ripening cone crop of various conifers, especially pinyon pine. Nutcrackers also undergo sporadic irruptions into lowland areas…but only once every several years or more. 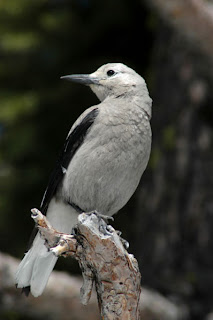 A bird of the high mountain regions of the American West, the Clark's Nutcracker is specialized for feeding on large pine seeds. Its behavior, annual cycle and even its morphology are closely tied to this diet. Like some other jays, this one has a special pouch for carrying seed long distances. Surplus seed is stored, usually in the ground on exposed slopes, in caches of five to ten seeds spread over a territory of something less than about fifty acres. They store more than they usually need, as protection against theft, but thereby also perpetuating its own food supply…as some of this seed sprouts to become new trees. Seed dispersal by Clark’s Nutcracker has resulted in a commonly occurring tree cluster growth form in 3 of these pines and has altered their genetic population structure in comparison to wind-dispersed pines. This storage behavior is associated with all jays’ remarkable memories; they are able to locate seed caches with remarkable accuracy; even six months later and burried under three feet of snow. When collecting seeds to cache, a bird can store as many as 90 seeds in a pouch behind its tongue. When full, the pouch forms a large bulge at the throat. 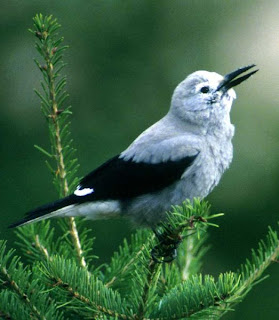 The Clark’s Nutcrackers eat much the same diet as other corvids; insects, berries, small animals and eggs…peanuts and suet from bird feeders are a favorite. They are especially adept at extracting food from pinecones by holding the cone in their feet and hacking it open with their strong bills. They locate large grubs in rotten logs in the same way and flip animal dung, again like other corvids, in search of insects.

These birds are monogamous and form long-term pair bonds. Pairs stay together on their territories year round. They begin nesting in late winter; relying on the food they have cached to raise their young. They typically nest in a conifer tree, generally in a fork at the outer branches. Both members of the pair help build the nest, which is a platform of twigs and bark, with a well-insulated cup made of bark strips and grass, with pine needles on top. 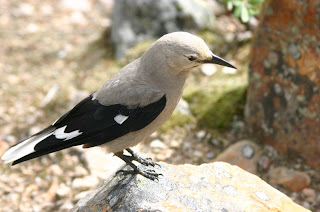 The Clark's Nutcracker is one of very few members of the crow family where the male incubates the eggs. In jays and crows, taking care of the eggs is for the female only, but the male nutcracker actually develops a brood patch on its chest just like the female and takes his turn keeping the eggs warm while the female goes off to get seeds out of her caches. Almost all juveniles become independent by the time the new seed crop is ripe, making their own caches.

Populations fluctuate, but may be increasing in some areas. Declining pine species in some areas, due to cattle ranching and/or climate change, may lead to reduction in nutcracker numbers.

And again, this jay’s voice is extremely varied and it can produce many different sounds. However, the most frequent call of Clark’s Nutcracker is commonly described as khaaa-khaaa-khaaa or khraa-khraa-khraa, usually in a series of three. Listen here.

Sources:
Posted by Beverly at 5:42 PM

I saw a jay this morning that looked like a cross between a Stellar's (head) and blue (body). Maybe it was!

Thought of you when I saw it.

It's one thing to be called 'The Bird Lady'; it's quite another to be thought of as the 'Jaybird Lady'! Let's not start that one! LOL

What a neat looking jaybird. Thanks Beverly, for sharing the information and photos for those of us in "the east" who've never seen a Clark's Nutcracker.

Really nice series about Corvids, thanks! Are Ravens and Magpies yet to come?
Clark's Nutcrackers are a favorite of mine, particularly because of their uncanny ability to locate you when hunting or hiking in high country. You'll swear nothing and no one much was around, sit down, unwrap lunch, and bingo- a couple of big ashy birds will be perched fifteen feet away, asking "are you going to eat all of that?"

Wow, thanks MD! I really enjoy research, as I’ve said…and try to gather stuff that’s more unusual about the birds. Mostly though, I notice folks comment on almost everything except the ‘educational pieces’. LOL

I could do Ravens and Magpies…though actually; if I read it right…magpies are more closely related to Jays than Ravens are. Funny, huh?

I had a pair of Black-billed Magpies around (very funny to watch them try to hang on a little suet-cage), that brought newly fledged youngsters to the feeders awhile back. It was neat to watch six of the big beauties all at once. Unfortunately, while my dog (an Akbash Dog) who normally ignores birds, H A T E S magpies!

When I first got Zeus, we lived off-grid at the edge of San Isabel Nat’l Forest, and I used to leave his dog dish outside where the Magpies found his kibble. It was ‘cute’ to watch him get up from a nap, and with a deep rumble, rush at them around his dish. Since moving to town, I feed him inside (so as not to attract the skunks, raccoons and bears who seem to be thicker here than up the mountain!). Still though, the magpies find his knuckle-bones if he doesn’t get ‘em buried quickly enough. It’s wild to see a Magpie with its head & shoulders half-way down the marrow-end of a bone! Well, I think it’s wild, Zeus thinks it’s rude and run’s ‘em off.

What a great post! Love the photos of the Nutcracker! We hope to spot one day as they are such neat looking birds. Thanks for sharing!

I sympathize with your Zeus. I've had a somewhat strained relationship with magpies with respect to them getting on quarters I'm packing out. I'm not sure why they have to get after a quarter wrapped in cheesecloth when there is a perfectly nice offal pile to nosh on.

Hmmmmmmm...could they be after fat? I'm not a hunter, but I am a cook...offal doesn't seem likely to be very fatty, is it?

I've seen folks tie whole rib-sections of deer to a tree, sans skin, so the birds could get at the fat.

I don't know, Beverly. Could be. However, there is usually quite a bit of fat around some of the organs and more that I take off and toss with the rest of the offal. Maybe they're after the lean!

Beverly
Please feel free to leave a comment by clicking 'comments' found at the end of each post. I'm still learning and find any comment helpful. Feedback is a good thing! Oh, and if you arrive somewhere inside this blog from an online search, be sure to click the main title, to get to the most current post. Also, at the bottom of this column is a list of 'tags'; click something you're interested in and it will bring up all posts on that topic. Cool, huh? 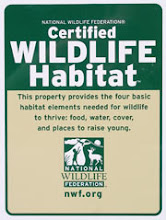 Do you find it scary that six companies control the news?

Thanks to my Cheering Section!